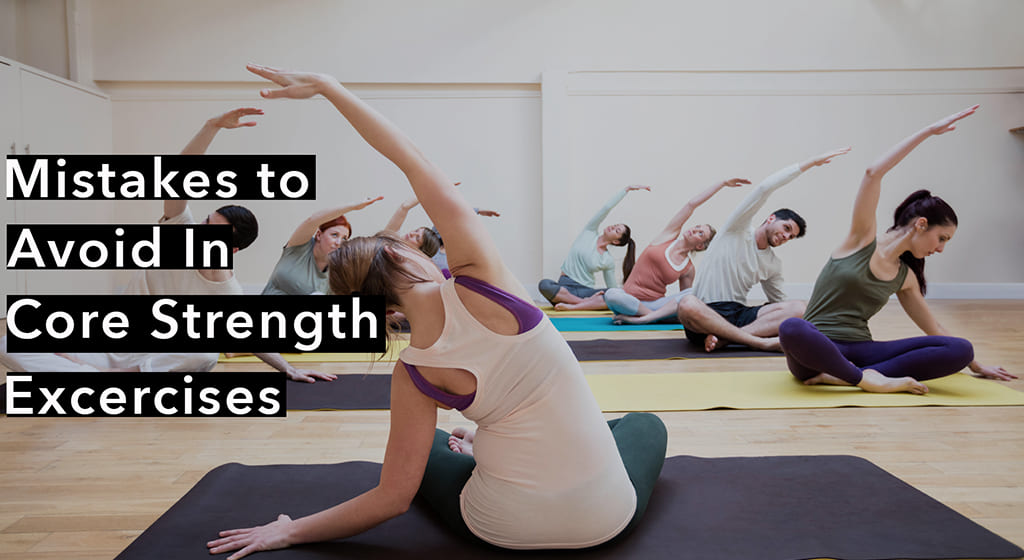 Are core strength exercises causing your back pain?

As a Yoga Teacher, watching most people doing sit-ups and other core strengthening exercises incorrectly is one of my worst nightmares. So instead of turning away and allowing it to happen, knowing that person will most likely be having or will have back pain in the near future, I feel that it’s my duty as a fitness professional to do all I can to stop people from unintentionally hurting themselves over and over again.

So I thought I should provide and share the information and tips that can turn all of your core exercises into safe, successful and more effective core work. Here are the top 4 mistakes most people make when doing core- strengthening exercises.

Ever heard a teacher say draw your navel to your spine? Well it wasn’t just to make you work harder.

But let me be clear about something: drawing the belly button in doesn’t mean sucking in your tummy and breath as though to look as skinny as possible. Absolutely not! The ribs should stay connected into the abdominals as though you were tightening a corset.

At the same time, the pelvic floor muscles should be engaging and lifting. This important action helps to activate the lower abdominals and core muscles (therefore also supporting the lower back) as well as provide support from the downward pressure that would otherwise cause weakened pelvic floor muscles.

This is another common mistake and a major cause of back strain and pain. It occurs when the back is allowed to arch when the core is under tension say for example in exercises such as Plank and Leg Lowers. This causes the lower back muscles to come under extreme strain from being the main area holding the weight of the body or the leg. It is a clear indicator that the core is not actually working or supporting the back. When performing movements in which the legs lower toward to the ground and putting more effort into the lower abdominals, there are 2 things to remember:

1. Use your core muscles correctly as described above (i.e. Pelvic floor and stomach flat)

2. Only taking the legs down as low as you can keep the stomach flat and your back flat on the ground or in a neutral position where there is little or no tension in the lower back muscles.

Neck pain can occur at the back and front areas of the neck. Both are usually caused by incorrect head placement when performing any exercise that requires lifting your head off the floor from a laying position. Excessive nodding or pulling with the hands on the back of the head can over-compresses the discs between the vertebrae in the neck. Pushing the chin up or forward puts increased strain on the neck muscles. Instead, there should always be a small space between your chin and chest about the size of a plum.

Start the exercise with a small nod of the chin keeping your head on the ground. Then as you lift up off the floor, keep the same alignment of the head and neck. Try to focus on lifting using the abdominals, not the neck. Remember pushing your face forward only makes it seem like you’ve lifted up higher.

Placing the hands below the base of the skull, can help to reduce the strain on the muscles of the front of the neck. However it is important to allow the head to stay heavy and relaxed in the hands and not to use the hands to pull the head forward or up. Arms can alternatively be placed at the sides of the body or crossed at the chest to stop from doing this.

4. Overuse of the Hip Flexors

The group of hip flexor muscles cross the front side of the hip joint. They are highly used in everyday activities such as walking, running, climbing stairs or any activity that lifts the leg forward and up.

The mistake that people often make when doing abdominal exercises such as crunches or leg lifts, is that they tend to use their hip flexors more than their abdominal muscles, therefore once again not really accomplishing the objective of the exercise.

Take for example an exercise like chest lifts with the legs at a table-top position. The objective is the lift the head and the chest without moving the pelvis. If you were to try and lift higher than this, it may seem like you are working harder and doing better, but it’s actually just "cheating" as the hip flexors now are doing that work.

This is why it's encouraged to either keep the pelvis and lower back in neutral or to remain in a flat back position throughout the entire exercise. The same incorrect muscle activation occurs also in exercises that require the legs to lift off the ground. By not initiating the movement from the core or by swinging or throwing the legs up, the strong hip flexors do most of the work and not the intended muscles of the abdominals.

Not only does it then become less of an effective exercise for the core and abdominals, but it can also be a factor causing lower back pain. Strong and tight hip flexors can cause the pelvis to shift from its ideal neutral position, leading to a shortening and tightness of the lower back muscles which causes sore muscles and unevenly distributes the pressure on the shock- absorbing discs between the spinal vertebrae.

This is not say that the hip flexor muscle group should not be exercised or strengthened. Particular posture types require a strengthening of the hip flexors in order to correct postural imbalances.

However, repeated overuse in exercises such as these are not beneficial to the strength of the core nor are they an ideal way to strengthen the hip flexors if that is what is required.

Search
Recent Post
Categories
Archives
We use cookies to ensure that we give you the best experience on our website. By continuing to browse the site you are agreeing to our use of cookies. For more information read our Privacy policyI Understand